Agent Peggy Carter from the Marvel universe was one of the most highly requested characters to examine in my Strong Female Characters study. I admit, I wasn't completely familiar with the character, having only seen her in Captain America movies, so I also quickly caught up on the new TV show Agent Carter. (I haven't read any comic books, so if you were wanting me to draw from that, my apologies.) I might still disappoint some of you, but let's jump into it... 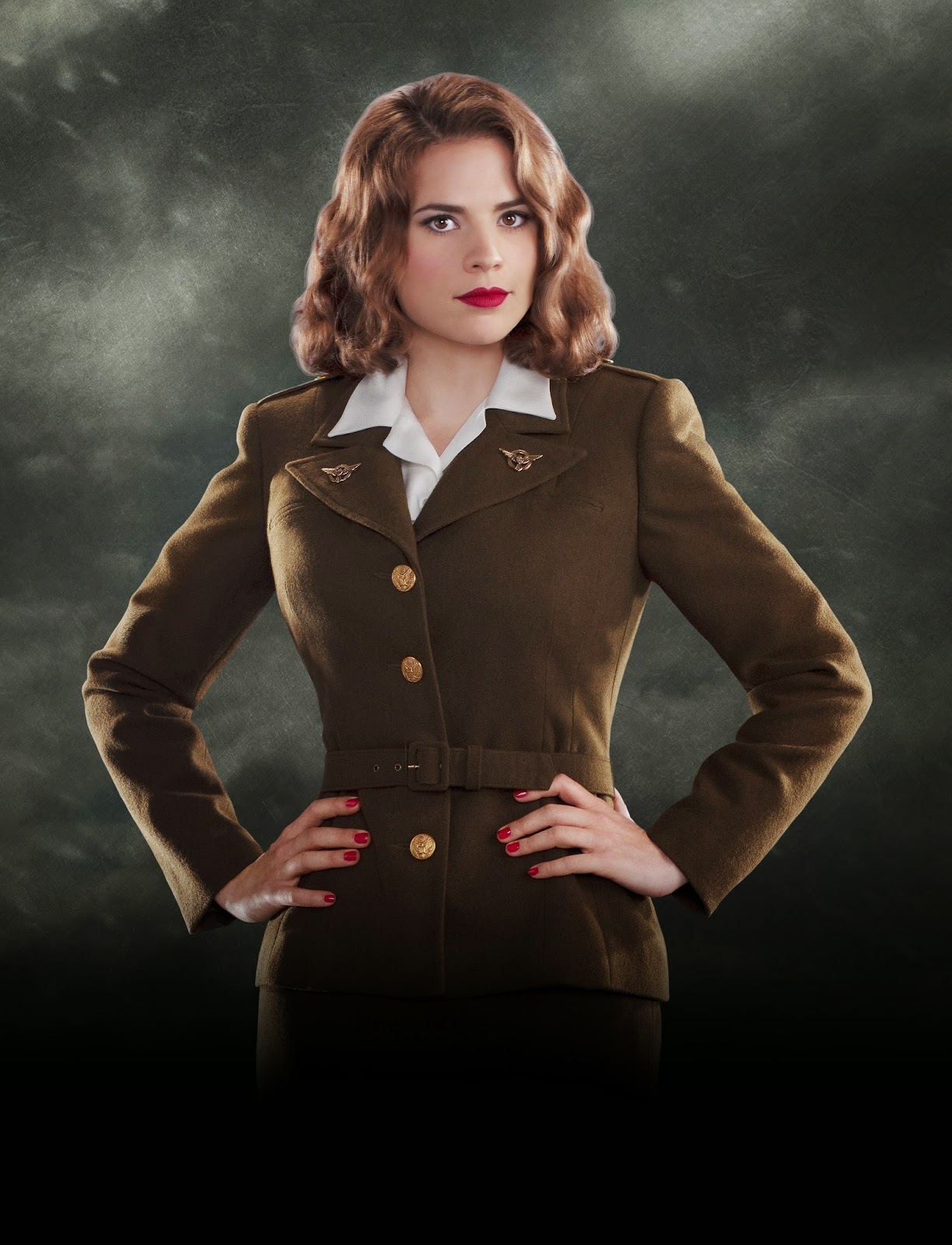 Margaret "Peggy" Carter is an agent for the Strategic Scientific Reserve (S.R.R), the top secret Allied war agency during WWII. From the movie and TV series, not much is known about her past, which you could argue is consistent with her character; she is a woman of mystery, and hates revealing personal details unless completely relevant.

Her greatest struggle seems to be the gender politics after WWII. Having been greatly involved in the war, the men are now home, and her position has reversed. Instead of pulling her weight alongside generals, she is now pushed to "secretary mode" and spends her days taking lunch orders. She faces sexism with surprising grace, however, biding her time.

Despite the frustrations she faces at work, she still takes her work seriously and buries herself into it, perhaps a little too much. She is intelligent, observant, and wildly independent. At the same time, she is grieving. The TV show takes place after Steve Rodgers a.k.a Captain America "dies," and she pushes her feelings aside and in doing so pushes friends aside. She does eventually acknowledge her weakness, however, and mends fences.

How does she appear to others?

Things that make us love her:

Now...what is WRONG with this character?
A flaw of the TV show, Agent Carter, is that Peggy is a predictable character and the only woman in the SSR. Obviously this was done for a reason as focus the attention solely on her and the sexism of the day. However, this makes everyone — the character, the viewers — view her as "the only one for the job," which in turn makes the character appear hoity-toity, as though she is leaps and bounds above others. This contradicts other attributes we see, such as valuing others and herself (yes, it is possible to write a character who doesn't care what others think of her without making her appear self-righteous).

As mentioned before, she also has no background, at least none that was seen in the movies and entire TV show in which she appears. No background, no foundation, no connection. A character might be likable without background, but it's hard to take someone seriously if you don't know where they are coming from. What was done RIGHT?

She can be friends with other women. Many times these types of loner characters who are surrounded by men all day and defined simply as "tough" are depicted as unable to carry friendships with women. This is one place where Peggy Carter doesn't place herself above others.

And again, though she tries to hide her emotions, we are still shown she has them. She loves, cries, worries, is frustrated, is impulsive, etc. This helps to balance the fact we don't know her backstory as these are emotions we can relate to.

What can we take away from this character?

Overall, Peggy Carter is an admirable woman with many good qualities, but in my opinion, she's weak as a character.

All of us want someone we can look up to. Give your character at least a few strong qualities that we can relate or aspire to, whether it's internal (fearless, patience, being completely comfortable in one's own skin, etc.) or external (stamina, incredible fighting skills, etc.).

Remember to provide background for your character. You don't have to go into great length in the story; you don't even have to reveal everything to the supporting characters. Glimpses here and there are good. Perhaps her father left her as a child. Maybe she had to retake the driver's examination test three times. The reason she's obsessed with eating healthily and exercising is because her friend died of cancer. A character without foundation is a pretty but empty shell. 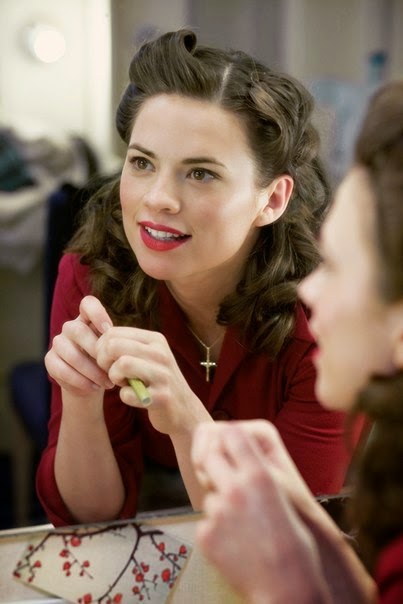 If you are familiar with this character and have differing views, don't be shy to post your opinions in the comments. I'd love to hear what you think.


Please feel free to give any other suggestions on female characters to study! Comment below or use one of these ways to contact me.

Hello all! I've just put some listings up on ebay (ah, how I love being unemployed). If you're interested, there are some books, but also a few tops and a DVD. Here's what I have for books :


Though Waters Roar by Lynn Austin (I purchased this book off a sale rack myself, so there are some visible flaws to the book but the pages are in great shape. More details on the selling page). Christian Fiction


Heartland Heroes by Andrea Boeshaar (this is a three-in-one book — they are always a fun read). Christian Fiction


A Draw of Kings, Book 3 of The Staff and the Sword, by Patrick W. Carr Christian Fiction


The Death of King Arthur: The Immortal Legend by Sir Thomas Malory, a retelling by Peter Ackroyd. This book doesn't sugar-coat the myths, but it is good if you're introducing the stories to an older  preteen/young teenager who has a hard time otherwise with King James language.


Most of the books are at a fixed price, but for the higher priced ones I do have the option open for people to send me a best offer for consideration :)


I'm just going to include my seller page in case you are interested in checking out the other items. The clothes are in great shape and the movie is a fun chick flick. http://www.ebay.com/usr/us.sarahc?_trksid=p2047675.l2559  Thanks everyone!
Posted by Sarah Coons at 10:36 AM No comments:

It's been a while since I've done a new character names list, but as I'm in the middle of research for my next post on female characters, I figured this was the perfect opportunity to create another one. 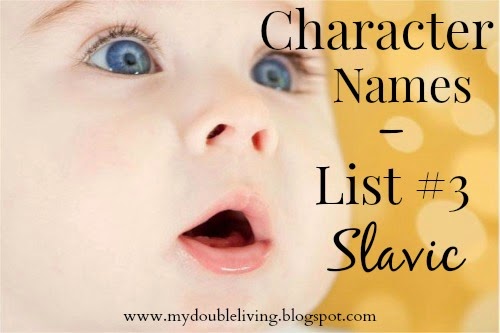 I've recently come up with a new story idea, and a few of the characters have a Slavic background. My mind has been a little obsessed with the idea, so here is a list of Slavic-derived names. Perhaps you too shall consider adding a little Slavic history to a character in your story?

**All of these names come from The Writer's Digest Character Naming Sourcebook, Second Edition. If you don't own this book, go buy it. It's literally an essential for any writer!**


Ana - meaning : One who will be reborn;  origin : Russian (form of Anastasia)

Misha - meaning : Who is like God ; origin : Russian (form of Michael)

Ziven/Zivon - meaning : Lively ; origin : Russian
Posted by Sarah Coons at 7:00 AM No comments: