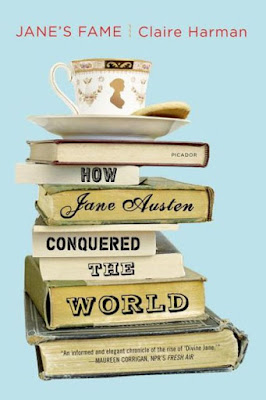 This is the story of how I conquered reading this book.

Don't go ahead and dismiss this review, however. It had its ups and downs, though that does make for a confusing book to review. But to start off on a good note, just look at that cover art; it makes my heart happy.

I purchased (or rather, I believe my mother did?) this book several years ago, started it, stopped. Started it. Stopped. Finally in February of this year I began the book again, determined to cross the finish line. It took me until now, with a month's break, but I was finally able to close the book on the last words. Satisfying.

As I got into the first couple chapters,  I was skeptical. It appeared a lot of what the author was stating as fact were assumptions, but the fact is, Jane Austen's life is shrouded in conflicting accounts and few material evidences of her life. If you're going to write a biography on her life, expect speculation.

By combining family accounts, personal letters, and the views of the time, the biographer Claire Harman is able to give us a glimpse into Jane's life, one that I'd never heard before reading this book. She covers Jane's personal life, her character, her writing and struggle with publication, and eventually modern-day Janeites and adaptations through the years.

I let go of my skepticism and gobbled up the first few chapters. Everyone has their own personal view on Jane, but to receive a personal view influenced by hard facts was fascinating, and made me love Jane Austen even more. (I especially enjoyed reading about what Jane Austen thought of her own writing and the process, gathered mostly from letters and family accounts. It humanized her.) I did notice the author seemed to repeat herself, especially in mentioning that there isn't much information to go on...everyone has a different account...but then continue on with her said assumptions. She could've cut down on these observances.

The middle chapters were rather dull, and that's where I set the book aside for a month. Leaving the personal world of Jane Austen and focusing on more technical aspects, such as publications and numerously mentioned critiques, I found myself skimming through the notes.

Again, this is how Austen conquered the world — her influence on chick lit, feminists, and film, to name a few. You'll get a couple chapters on her life, but if you're a true enthusiast and want to know more about how persuasive she's been over the lives of millions, I highly recommend you read this book. Decide for yourself what you accept as fact or fiction, possible or impossible.

And know that Jane couldn't care less what you think of her.

Posted by Sarah Coons at 6:12 PM No comments: 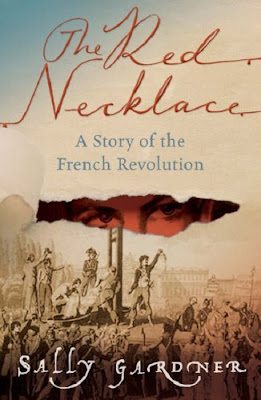 In April I came down with a sinus and ear infection. I've never had the latter, and I wouldn't wish it on anyone. The combination of the two rendered me useless, and all I could do was lay on the couch with my eyes closed. Even my fall back, television, was useless.

So came up with the idea to listen to an audiobook. I don't often use audiobooks as I find, unless the words are directly in front of me,  my mind wanders in a thousand different directions. When you literally have nothing else to do, however, they come in quite handy.

I found an audiobook for The Red Necklace by Sally Gardner and read by Tom Hiddleston. I'd never heard of the book or its author before, but what drew me was my like for the charming British actor who would be reading said book to me, and well, there was no way I wasn't taking advantage of that.

The Red Necklace combines historical events from the French revolution and gypsy magic. It's the first book in a series (the second book published in 2009, two years after the first, so I don't know if the author is planning any other books), and young adult. I highlight these two things because the book was slightly shallow and ended rather abruptly in my opinion, and I can only hope the second will flesh out the characters.

Overall, the story was enjoyable and characters entertaining. It took me about halfway through the audiobook to really get caught up in the story, and I feel like some of the character growth was more of a leap rather than a gradual journey. This isn't a story I would rush out and get for my own personal library, but if you want a light story with magic, adventure, and young love interwoven with accurate historical events, then I think you'll have fun with this book... especially if you listen to the audiobook.

Tom Hiddleston is known for being talented with accents and impressions, and he doesn't disappoint. Each character has his or her own unique voice. I sometimes cringe when audiobook readers try to create voices — I have this problem where I feel intensely awkward for someone else. When Hiddleston began the story and voices, I began to feel that "oh no" flush on my cheeks, but then I realized he was doing an amazing job. His narration contributed greatly to the entertainment.