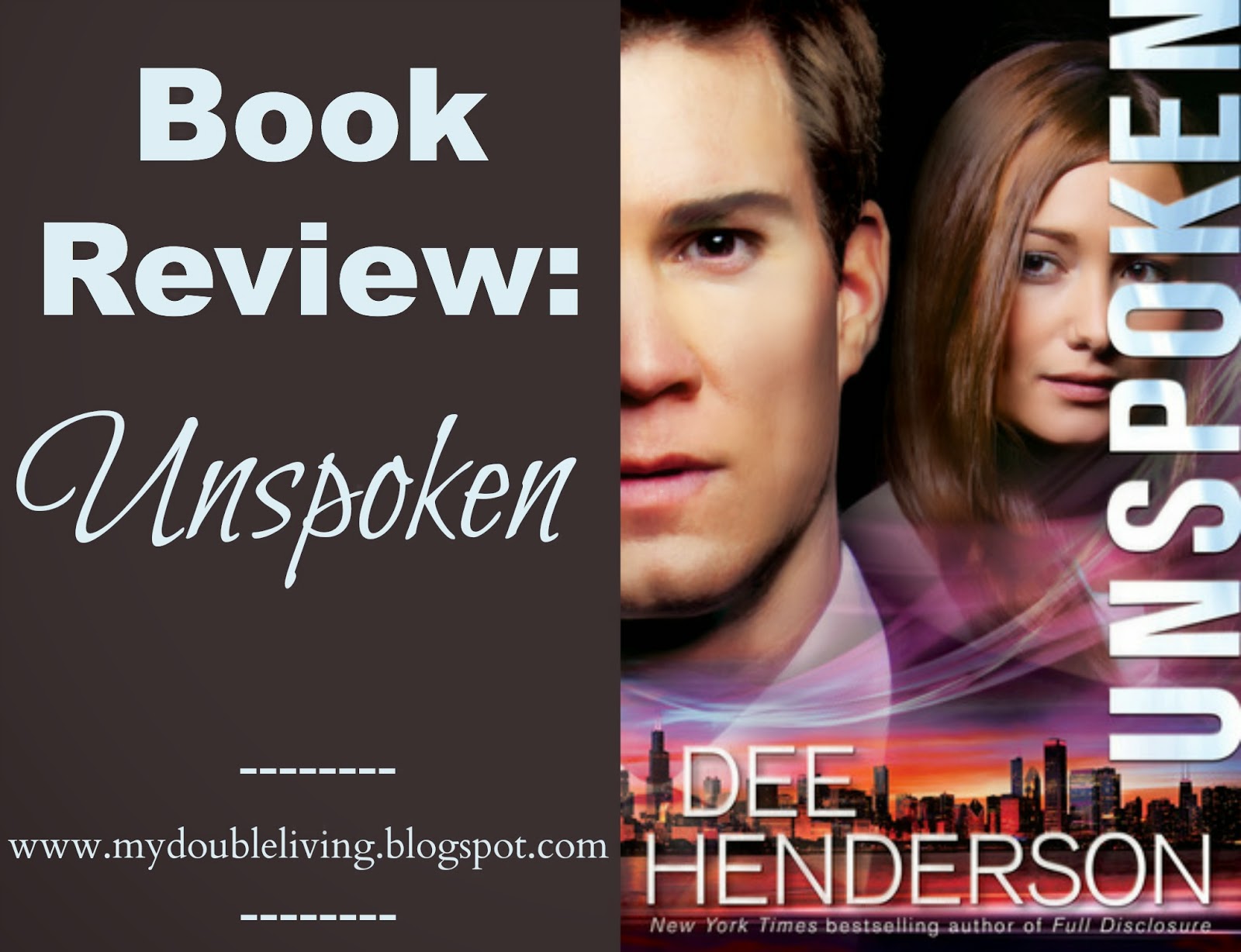 Last Christmas I received Unspoken by Dee Henderson. If you consistently keep up with my posts, you'll probably recognize I've mentioned this author several times. Henderson has inspired me in my own writing, and her books are always full of suspenseful expectations and action.

Naturally, I was psyched to start reading this book, but I held off until around the end of February just so I could savor the anticipation. …It is now April, and I've just finished the book. Don't let that shut yourself off completely from the review, however. I've never been so confused but satisfied (and a little chastised) by a book.

Seeing as every other book I've read of hers contains tense thrills and nonstop action, I expected this book to be the same. The back cover was a bit misleading for me, but after reading the book I reread the back cover summary and realized it wasn't as black-and-white, guaranteeing action as I first assumed.

I, unfortunately, spent half of this book waiting for the pace to pick up; three quarters in I realized that wasn't going to happen and spent that time in disappointed reading. However, for the last quarter of the book, I opened my mind and started accepting the story for what it was. If I had realized this in the first place, I think I would've enjoyed the book more.

Brief intro to the book: Bryce Bishop is a rare coin dealer; when Charlotte Graham offers him a fortune of old coins at an unfathomably low price, he can't say no, not only to the coins but to the mysteriousness of this woman. He will soon discover she indeed is not a mere inheritor of a plethora of coins.

I applaud Dee Henderson on her research; she is THE QUEEN of research in all of her books, and I'd love to sit down with her someday and just ask a million questions on how she goes about gathering material. I don't know if she's had personal experience dealing with coins, but you'd think so considering the depth of detail she uses for the characters.

While this helps the circumstances and lives of the characters to feel real, I found myself bored by the lengthy discussions of business talk and how to manage handling and preparing coins for sale. Not that Henderson's writing failed in being interesting, for she's excellent at making mundane ideas feel important, but I found myself bored just because I'm not someone who would be interested in reading pages of dialogue merely about coins. As a writer I can love and appreciate the work and detail, but as a reader I personally felt like skimming the pages a few times. (This goes on for about the first half of the book.)

All of that being said, the heart of the story is truly the title: unspoken. The entire book really focuses on the building relationship of Bishop and Charlotte, the trials they must overcome, the choices they must make, the challenges in facing ghosts of Charlotte's past. I don't want to go into too much detail so as not to spoil anything, but writing a review on such a book is hard without over explaining.

While the pace did pick up towards the end and certain matters were resolved quickly (which was needed to balance the rest of the "slow but steady" story), at the end of the book, I was tempted to go, "That's it? I wanted more!" I then stopped myself and reconsidered. Really, the book ended on a perfect note for the characters, whether everything was "resolved" or not. What I wanted resolved wasn't the point of the story. What was "unspoken" wasn't just what was left hanging, but also what was settled and what was to come, if that makes any sense.

Overall, I felt like this was a nice change of pace and a character-driven, "mature" story. I would love to reread it again sometime with more of an open mind so I can examine the character developments closely. I also felt a bond with Charlotte towards the end of the book; her spiritual thoughts and even struggles were something I felt I could relate to, which made me love the end of the this book even more.  :)


My rating: 4 out of 5
(keeping in mind, this is a "retrospect" rating. If you had asked me to rate this just a few weeks ago, I would've given it a bit of a lower rating)

Would I recommend this book to a friend?
Yes, I would. Again, I don't want to scare anyone away from reading this book because of my review. Keep in mind this is a very "personal reader" sort of review, and I went in thinking the story would be entirely different.
Posted by Sarah Coons at 5:46 PM No comments: