So You Want to Write a "Strong" Female Character?

It's all over social media. It's in every Q&A, every blog, TV show, comics. MORE STRONG FEMALE CHARACTERS! No more damsels in distress, but women who can hold their own and don't need someone to save them.

Even characters we already know are changing identity in the fiction universe. I recently wrote a post about the new Thor in comic books now becoming a woman (here). The story is that the Thor we know now will lose the ability to wield the hammer and a woman will pick it up and become the new Thor.

Why introduce more female characters? Variety, perhaps. It's true that for years males have dominated the "hero-type" arc. If someone wants to change things up, use a different perspective to make their point known, I'm down with that.

What I cannot stand is introducing a female character because she is a she.

The hooded figure somehow managed to trip him, and his back slammed into the ground. The point of the sword stilled at the edge of his adam's apple.

"Fine, you got me. Unveil yourself, coward, so that I may see my foe before I die."

The figure gently pulled back the hood, and a tangled mess of black curls swept down her waist.

Obviously, this example is cliche and predictable, but that's the point. In our attempt to push more females into the universe of story-telling, they've become predictable and, quite frankly, lame (*this is not in every case, just to make clear!*). So many characters I've seen lately have the same story : She wanted to prove she was just as capable of handling tough situations as men, so she joined the fire department. Her family is dead and so she learned to fight as her way of getting revenge.

Other "marks" that automatically label a female character "strong" that I've seen a few times recently are a character marrying but not taking her husband's last name, skimpy outfits (which has been around for years), or a character is a lesbian — all three of these hardly ever needed to enhance the story, but thrown on to keep the undertones sexualized, the female "female," or identify with the world of relationships today. 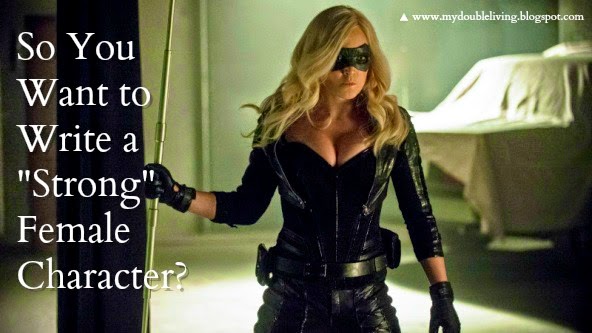 (Sara Lance from Arrow. The good: She loves her family and wants to protect them and has a special heart for protecting other girls who can't protect themselves. The cliche: Angry, bisexual, and not-gonna-protect-much-with-that-suit)


What do I think is lost in the majority of strong female characters? There is no subtlety left. It's all or nothing.  "GIRL OVERBOARD!" is what I imagine popping up on the screen when I see another "kick-butt" female. It's damaging to our perspective.

It's no wonder people cringe when they see a main character is a woman. So many interesting female characters are nothing more than balance and are given nothing to do besides look tough and say no to the man who wants to take them home. Go ahead, drink them under the table, girl. What are you left with at the end of the day? …Well, we never really get to see that, do we?

I'm all for a woman character who is able to defend herself, whether that's through speech or in a physical aspect. If a woman wants to be a police officer, fire fighter, etc., then she should go for it and be commended. But I don't think she should be commended just because she is a woman. It all comes down to character.

So how can we change this tainted view of female leads? What does — or should — it take to make a female character likable? Here's a thought: Who says that a "strong" character has to mean she can take care of herself and beat the boys? It's true that females want another female to identify with, but we should love and admire a character because of their actions and their moral decisions, not just because the character is a woman.

As writers we should strive to create well-developed, complex, and strong characters, both male and female. Over the next few posts on this subject (they might be interspersed among others) I'm going to examine a few "strong" female characters whose cores are weak and also look at female characters whom I feel have earned the right to be characterized as "strong."


Do you believe the majority of "strong" female characters are misguided?
Let me know in the comments!

Posted by Sarah Coons at 5:53 PM No comments: